Paradise kingfishers comprise six species of small, forest kingfishers in New Guinea and nearby islands. A uniform lot, the adults bear long streamer tails and red bills and feet. Unlike most kingfishers, they are not closely associated with water. They feed on insects and small vertebrates that they locate from hunting perches. The Red-Breasted Paradise Kingfisher has two populations, one in NE New Guinea, and the other in the Vogelkop region of the island's far northwest. Little is known of its habits, but like others of its genus, it probably lives in active termite nests.- CB

Carel P. Brest van Kempen of Utah was born in 1958. He has won many awards of excellence and best of shows and illustrated many books including Rigor Vitae: Life Unyielding, Biology of Gila Monsters, Dinosaurs of Utah, Pythons of Australia and Savannah and Grassland Monitors. His work is in collections of the Springville Art Museum, Leigh Yawkey, World Center for Birds of Prey, Sonora Desert Museum, Natural World Museum and Bennington Center. 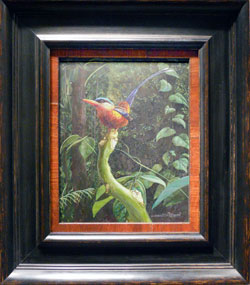